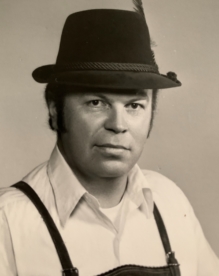 Norman Leo Edlebeck departed from this earth on Sunday, March 8, 2020 in Marinette, Wisconsin. Norm was the son of Joseph and Rhea (Bentley) Edlebeck , born on October 22, 1939 in Wausaukee, Wisconsin. Norm loved music and started a three piece band at age 18 in 1957, in which he played accordion, his brother Bill on drums and a cousin on guitar/banjo. They played for many weddings and small parties in the area. He acquired the name “Whoopee” at age 8 by his family and friends, due to his admiration for polka king, Whoopee John. Norm went on to become the infamous 10 piece band, Whoopee Norm Edlebeck And His Dairyland Dutchmen. Norm played for decades throughout the United States at various dance halls and festivals, as well as having a Saturday morning polka radio show in Marinette for many years. Polka music was his true love! Norm also worked for over 30 years at the Wausaukee Post Office, retiring in 1992. He also owned a Dog n Suds Restaurant and Laundromat in Wausaukee.

In 1993, Norm moved to New Ulm, Minnesota, where he also opened a Laundromat and continued to play band gigs and festivals.

Norm is survived by his brother, Bill (Trudy) Edlebeck of Port Washington, Wisconsin. He has two daughters, Kimberlee Schneider (Peter) of Charlotte, North Carolina and Erica Penkert (James) of St. Peter, Minnesota. He has seven grandchildren: Philip (Amanda), Matthew, Marissa and Eric Schneider and Grace, Bianca, and Cora Penkert. Norm had a loving companion in his later years, Carol Seivert, who also survives him. He is preceded in death by his brother Charles; his sister, Marlene Lewandowski (Stanley); first wife, Donna Edlebeck as well as his second wife, Kathrin Edlebeck.

Visitation will be Sunday, March 15, 2020 from 1-3:00pm at Roubal Funeral Home. Burial will be in Evergreen Cemetery, immediately after.