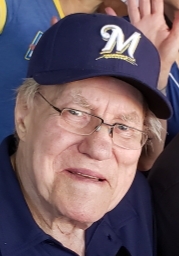 age 84, of Athelstane, passed away June 24, 2020, at a Green Bay Hospital. He was born in Milwaukee on July 16, 1935; son of the late Frank and Clara (Goldschmidt) Kudlewski. Ron was united in marriage to Geraldine Bugalski on June 1, 1957. She preceded him in death on December 24, 2018. Ron had a quick witt and great sense of humor, he liked working on his computer and fishing, and enjoyed playing cards, especially cribbage. He loved watching the Green Bay Packers and Milwaukee Brewers. Ron also loved traveling, living in the country and was very adventurous. He thoroughly enjoyed spending time with his family.
Ron is survived by his five children: Linda Josi, Jacqueline (Tim) Waedekin, David Kudlewski, Katherine (W. Brode) Powers and John (Shelly Stockwell) Kudlewski; six grandchildren and three great-grandchildren; and a brother, Donald.

A Celebration of Ron’s life will be held at a later date.