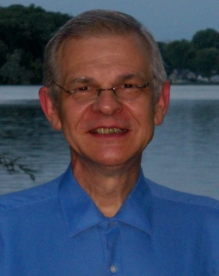 On February 22, 2020 after a long battle with cancer, Louie has earned his promotion and got a huge sign on bonus, a reunion with his daughter Angelique and family and friends he has not seen in a long time in a wonderful place where he walks now with his Lord and Savior. Louis was born in Rhinelander, WI and raised in Pembine. WI. Louie married his high school love, Corinne Butterfield on September 7, 1974. They later moved to the Milwaukee area where Louie began his career as an engineer. Louie’s love for God’s creations in nature gave him treasured memories of hunting quests, fishing trips with his brothers and father, and adventures piloting his Luscome airplane through the splendor of the vast blue skies. He enjoyed peaceful hours of reflection sitting on a bench alongside Lake Sinissippi with Gandolph sitting next to him in the back yard. With his wife by his side, Louie led efforts to preserve and protect nature and human life. He and Corinne served with passion in their hearts work to educate and bring awareness to the sanctity of life of unborn children and families in crisis by supporting organizations such as Right to Life and Evangelical Child and Family Agency.

Louie enjoyed a simple life. His signature fashion was an old shirt, faded and frayed from the years and a pair of Dickey’s bib overalls (He even had a “Sunday” set of overalls) from Fleet Farm topped with a comfortably worn vest or jacket and well-traveled work boots that were evidence of the miles he covered in them. Louie took pride in a well-stocked toolbox; well rolling tool room is probably more to the point. Louie didn’t know the meaning of “minimum order” and was known for multiple backups for the backups which would explain the narrow walking paths through his 40×40’ garage, according to Louie, “you can never have too much garage”. Louie spent countless hours in his garage office doing research and making plans for his next invention, he had several patents on things he invented over the years. Louie did in depth study and research on family genealogy leaving us with a solid history of our lineage.

During the long journey of his illness, it was thinking about baby goats, puppies and sunshine that helped him to relax to endure the countless tests he had ahead of him. Louie was courageous and an unforgettable inspiration to all of us to never give up and always give it to God. Above all he was a faithful servant for the Lord. He was a prayerful and deeply scriptural man who lived his life in the study and reflection of Gods living word.
His life was a living example of the scripture he studied so often, 1 Timothy 1:17 “Now to the King eternal immortal, invisible, the only God, be honor and glory forever and ever”.
Louis was preceded in death by his daughter, Angelique Marie and brother, Thomas Joseph. He is survived by his loving wife and best friend Corinne, two sons, Louis Harvey (Leslie) and Jason, and Kathy Carrigg who will always be our daughter at heart. Grandchildren, James, Bryan, Josh, Faith, Andrew, JT, Michael, Gabriel, Christiana, Erin. Parents, Louis (Barb) and Mary Ellen (Bill) Dixon.
Brothers, Doug (Sandy), John, Paul (Charlene), Greg (Wendy). Sisters, Trish Gardiner (Mark), Mary Beth Hammer (Carl), Laura Krause (Brad), Angela Gustafson (Jason). Nephews, nieces and many loyal, caring friends and most faithful canine companions Gideon, Gandolph and Gracie.

A special thank you to the medical staff of UW Health Madison who tirelessly investigated Louie’s complicated journey with cancer.

Please join us for a celebration of Louie’s life on Thursday, February 27, 2020 Northwoods Chapel, W8046 Aspen Lane, Pembine, WI from 10am until the time of his funeral at 12pm. Pastor Clark Lindsay is officiating. Burial will be in the Pembine Cemetery this spring.