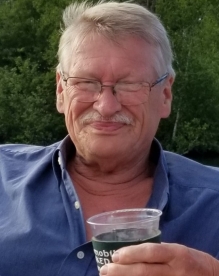 passed away Sept 9, 2020 surrounded by his loving wife and two daughters after courageously battling cancer. Bill was born May 12, 1952 to the late John (Jack) Jansen and Mary (Black) Higdon. Bill grew up in Port Townsend, WA. He moved to Freedom, WI after serving a short time in the service. This is where he met and married the love of his life Dorothy (Dort Foster). They eventually settled in Kaukauna to raise their daughters.

After working in the paper industry at Thilmany Pulp & Paper, Riverside Paper and Neenah Paper, he eventually moved north and culminated his career at Lamer’s Bus Line in Marinette as a terminal manager where he officially retired in June of this year.
Bill had many passions and hobbies that kept him busy and it was a rare time he didn’t have a full social calendar. Among those; going to Packer games, hunting, slot machines, camping, going to country music and oldies concerts, woodworking, classic car restoration, and traveling. Travel to Hawaii was his favorite vacation destination and managed to visit 5 times.

Bill’s love and devotion to his family stands out above all. He shared more than 50 years with his loving wife Dort. They would have celebrated their 50th anniversary on Oct 24, 2020. Together they raised their 2 daughters, Sandie (Matt) Schmitt and Tracy Jansen. His shining lights were his 4 grandchildren, Jacob (Shelby) Schmitt, Samantha Schmitt, Alison (Emmanuel) Schmitt and Savana (Chris) Jansen.

Bill was preceded in death by his parents, brothers Martin and Christopher, a nephew Chad, along with his father, mother, brother and sister’s-in-law and many other loved ones. Bill is survived by his wife, children, grandchildren, 2 sisters, 2 brothers, 2 sisters-in-law and many friends he considered family.

Our deepest thanks go out to the friends, family and neighbors who all assisted Bill and Dort for the last year in more ways than we have space to list. A special thank you goes out to his doctors, nurses, specialists and his “angels of mercy” the Unity Hospice team.
Bill will be remembered for his sense of humor, love of life, and the love for his family and many friends made along the way.

We invite you all to share these memories with the family at a Celebration of Life on October 3, 2020 at Amberg Community Center, Grant St, Amberg, WI 54102 from 2pm to 6pm.