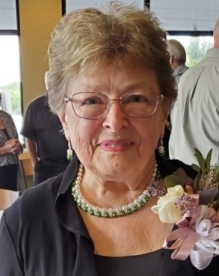 age 79, of Amberg, died Tuesday September 13, 2022, at Aurora Medical Center-Grafton. She was born in Green Bay on May 10, 1943; daughter of the late Clarence and Evelyn (Deneys) Poels. Karen graduated from Pulaski High School in 1961. She was united in marriage to her husband Roger in 1962. They lived for numerous years in Sobieski before moving to Amberg in 2004. Karen adored tending to her rose bushes at home, trout fishing and had an extensive Precious Moments Collection in which she adored. She enjoyed feeding everyone and always made twice as much than needed.

Mass of Christian Burial will be 11am on Tuesday September 20, 2022, at St. Agnes Catholic Church in Amberg. Father David Schmidt will preside. Visitation is from 9:30 am until the time of Mass. Burial will follow in the Amberg Cemetery.

Mary, I am so so sorry! As we all know, there are no words. Hugs and love to you and yours.
Roger our deepest condolences to you and your family. Remember all the happy times together. Gerry and Jan
Our thoughts and prayers to the entire family. So sorry for your loss.
We are so sorry for your families loss. You are all in our thoughts and prayers.