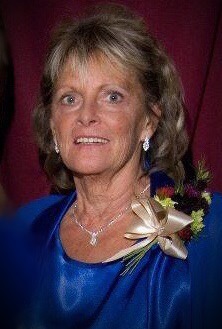 age75, of Pembine, died peacefully surrounded by her loved ones on Tuesday April 9, 2019, at Florence Health Services.  She was born in Sheboygan on January 23, 1944; daughter of the late Leonard and Lillian (Gremmer) Peik.  Judy owned and operated the Pembine Heights Bar and Grill for many years until retiring in 2003.  Her humor and wit made her so easy and fun to talk to that she met many friends in this business from all over and stayed in contact with them well after retirement.  She enjoyed playing cribbage, crocheting, playing games on her computer and watching her beloved Green Bay Packers.  Most of all she loved spending time with her family.  Judy was loved by so many.  She had a beautiful smile that would light up every room she entered.

Family and friends may call on Monday April 15, 2019, at Grace Lutheran Church in Pembine from 1pm until the time of the funeral service at 3pm.  Pastor Gene Wickman will preside.  Interment will be in the Pembine Cemetery.

Judy’s family wishes to send a special thank you to Donna Weber, Linda Krause, Marcy Maye, and Sandy Bayer for each playing a special part in her life and always being there for her.

In lieu of flowers, monetary donations towards the Pembine Rescue Squad would be appreciated.