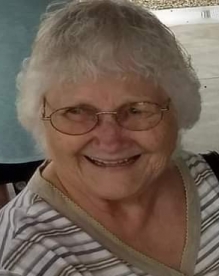 age 81, of Athelstane, died at home on Friday August 27, 2021. She was born in Green Bay on March 8, 1940; daughter of the late Earl and Evelyn (Chapeau) Perrault Sr. Joanne married Eugene “Porky” Gillis on April 27, 1957 in Green Bay. In 1972 the couple moved to Athelstane. She enjoyed playing slot machines and bingo at the casino as well as crocheting and watching the Green Bay Packers. Most importantly time spent with family was most treasured.

A Celebration of Life Service will be held at a later date.

Sorry to hear of her passing. Truly the life blood of her family
Deepest condolences to all. My cousin Joann was a lovely woman. I enjoyed the time spent babysitting for her and Gene and our summer trips to Lake Noquebay.