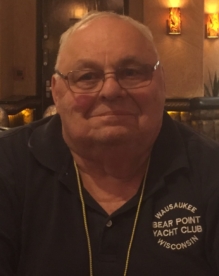 age 73, of Wausaukee, died unexpectedly from natural causes Saturday April 25, 2020. He was born in Marinette on October 19, 1946; son of the late Hilbert and Virginia (Mason) Radtke. Slug married Lyla Peters on February 14, 1976. He graduated from Wausaukee High School in 1964. Slug worked for Bolens Snowmobile Co. in the late 60’s until early 70’s in sales and promotions where he traveled the United States. Then he worked as a heavy equipment operator for many years. His picture appeared in National Geographic magazine. He belonged to the International Union of Operating Engineers for 50 years. He was very proud to be associated with companies in Wisconsin.  Slug was the current Village of Wausaukee President for the past 8 years. He also was Village Trustee for 12 years, President of Marinette County Snowmobile Alliance, and President of Bear Point Sno-Crusiers Club. He was involved with many snowmobile clubs. Slug was known to speak of snowmobiling 365 days of the year. He joined the National Guard Reserves and was a life-time member of the Wausaukee American Legion.

Slug’s parents bought Bear Point in 1945 and Slug took over the bar in 1981; renaming it to Bear Point Yacht Club. He ran it until the present time. He loved his family bar and most importantly loved talking to many friends and customers. He was also well known for his $2 bills and people always knew where they came from. Slug also donated proudly to Pastor Fred’s Food Pantry. He was a wealth of knowledge; if you needed to know anything just ask him. He enjoyed traveling the US with his wife, Lyla. He was also known for driving Miss Daisy (his wife) to the casinos.

Due to the current public health restrictions, Slug’s family will have a private viewing with burial to follow in Evergreen Cemetery.