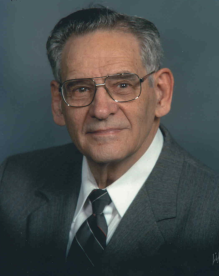 H. Eugene Eslinger went to be with his Lord on Saturday, September 3, 2022, at the age of 95. He passed away peacefully after several months of increasing weakness. “Daddio” is lovingly remembered by his two daughters; “Grampa” is greatly missed by his grandchildren; and “Gene, “Uncle Gene,” “Pastor Gene,” or “Mr. E” is also fondly remembered by many relatives, friends, and former students.

Gene was preceded in death by his loving wife Irene in January of 1998; parents John and Mary Eslinger; brothers Glenn and Norman; and sister Zoe Mundt. He is survived by his two daughters, Becky and her husband David Allen of Naknek, Alaska, and Ruth and her husband Jim Grosse of Dillon, Montana; seven grandchildren and thirteen great-grandchildren.

Gene was born in Fort Smith, Arkansas, February 27, 1927, later moving with his family to McAlester, Oklahoma, in 1936. After serving at the Pearl Harbor Pacific headquarters during World War II, he attended and graduated from Oklahoma State University with a B.S. in Mechanical Engineering. This was followed by employment in industry at Allis Chalmers Manufacturing Co. in Milwaukee, Wisconsin.

It was in Milwaukee where Gene heard the Gospel of Christ and received Him as his Lord and Savior. This deep impression stimulated him to attend and graduate from Baptist Bible Seminary in Johnson City, New York. There he became closely acquainted with Irene Tachick. After Gene and Irene’s marriage in 1953, they went to northern Wisconsin for their first ministry. They began Bible studies in several locations in that area, eventually bringing four groups together in Wausaukee and building Immanuel Baptist Church.

After ten years in northern Wisconsin, Gene and Irene continued founding or developing churches in several locations that included Munising and Escanaba, Michigan, Staples, Minnesota, Algoma and Green Bay, Wisconsin. They also founded Christian Fellowship Academy in Green Bay, serving many students for 16 years. It was there in 1998 when Irene passed away from pancreatic cancer. She was laid to rest at the Wausaukee Evergreen Cemetery where Gene will join her. Beginning in 2000, Gene began a ministry to inmates in Green Bay and ultimately at many of the Wisconsin state prisons. When he moved to be near his daughter Ruth in 2006, he continued to write a weekly Bible message to those inmates, continuing faithfully in that ministry at least monthly until the spring of 2022. From 2006-2022 Gene lived in three locations: Elkhart, Kansas, Castle Rock, Colorado, and Dillon, Montana.

Two memorial services will be held: one in Dillon, Montana, in the community room at Bicentennial Apartments on Friday, September 30, at 4:30 PM, with a luncheon following. The other service will be at Immanuel Baptist Church in Wausaukee, Wisconsin, on Thursday, October 27, at 11:00 AM, also followed by a luncheon. In lieu of flowers, Gene asks that you consider giving to a mission’s project of your choice.