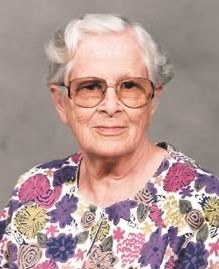 age 101, formerly of Pembine, passed away peacefully Sunday December 29, 2019, at Florence Health Services. She was born in Marinette on July 30, 1918; daughter of the late Harry and Myrtle (Tanner) Van Camp. She was an avid Packer and Brewer fan. During the summers she loved camping and rummaging. She also enjoyed knitting and sewing, cooking and baking, playing cards and in her younger years hunting. Catherine worked as a Butcher at the Pembine Grocery Store for many years until retirement. She was a long-time member of St. Margaret Catholic Church and played the organ for 70 years. Catherine cut the ribbon on the opening of the Interstate Bridge between Menominee and Marinette in 1929 and did the cutting of the ribbon when the bridge was rebuilt in 2005.

Mass of Christian Burial will be 11am on Saturday January 4, 2020, at St. Margaret Catholic Church in Pembine with Father Michael Lightner officiating. Visitation is from 10am until 11am at church on Saturday. Burial will be in the Pembine Cemetery this spring.