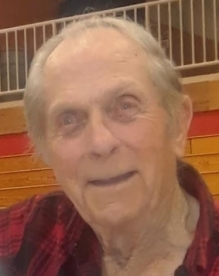 age 86, of Amberg, died peacefully Sunday February 21, 2021 at his daughter’s home in Crivitz. He was born in Toronto, Ontario on August 20, 1934; son of the late George and Winifred (Sherington) Sweeting.
He started his working career in California at an Electrical Supply Distributing Company and in 1977 he met his future wife, Janis. They were married May 16, 1981. Bill and Janis moved to Amberg in 1984. He worked for Packerland Packing for 7 years, the Town of Amberg, and was an avid golfer. Bill was very proud to be a Knights of Columbus 4th Degree member. He raised a tremendous amount of money throughout the years especially collecting for the Tootsie Roll drives where he would always have his table set outside local businesses or go door to door.

Funeral Service will be 11am on Friday February 26, 2021 at Roubal Funeral Home with a brief service provided by the Knights of Columbus. Visitation is from 10am until the time of Bill’s service.  Burial will be in the Amberg Cemetery this Spring.