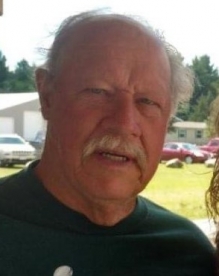 age 78, died unexpectedly on November 6th at St. Mary’s Hospital in Green Bay with his family by his side. He was born on April 28th, 1942 to parents Elmer and Margaret (Magnuson) Vertz. He was a lifelong resident of Wausaukee.

While growing up, Vern worked with his dad & brothers on the family farm. They also cut Christmas trees & boughs. Vern grew a love for farming that he carried with him for his lifetime. Vern owned a hobby farm with cows, chickens, pigs, burrows and horses for most of his life.

In his younger years, he was part of a rope pulling team that won the “national title”. After high school, he went with Uncle Joe Magnuson to Elgin, IL to work in a cemetery. Upon his return he worked in the feed mill where he earned the nickname “grinder” and later went into the wood cutting business for Schroeder and eventually on his own. In the early 80s, he started working for Scott Construction. He held many positions at Scott including, driver, mechanic, plant operator & salesman. He was very proud of the roads he helped to build throughout Wisconsin, especially the road on the Oconto breakwater & the roads on Washington Island. He retired from Scott in 2012 at age 70.
On November 2, 1985 Vern married Julie Janecek and they recently celebrated 35 happy years together.
Vern was tough on the outside, but soft on the inside. He loved his family deeply and will be greatly missed. He was a friend to all who met him and would do anything to help someone in need. He will be also be missed by his cat, Betsy and his dog, Joey.

Vern is survived by his wife Julie, children, Lisa (Tod) Robertson of Green Bay, Trent of Santa Barbara, CA and Melanie (Darin) Osterman of Greenleaf, WI and daughter-in-law Patti Jarmin of Wausaukee; grandchildren, Tyler (Tammy) Robertson, Brittney (Gage) Hannot, Adam (Whitney) & Brandy Vertz, Clayton (Cassie) Tucker & Matthew Osterman, great-grandchildren, Cooper and Dawson Vertz, Amelia Hannot & a 4th on the way; brothers and sisters, Pat(Gene) Sebero of Porterfield, George (Karen) of Wausaukee, Stanley (Bev) of Shawano, Gloria (Steve) Kafka of Wausaukee, Dave (Barb) of Crivitz, Laura (John) Frendreis of Antioch, IL. He is further survived by many special nieces and nephews especially Nikki Skiba Reinke, his much cherished niece with whom he cultivated a close abiding paternal relationship. He was preceded in death by his son, Todd, his parents, his brother Ron who was killed in the Korean War and an infant brother Elmer.

Visitation will be held at Roubal Funeral Home on Saturday, November 14th from 11-1, service at 1pm. The funeral will also be live streamed for those unable to attend. There will be a link on Julie’s and Melanie’s Facebook page.

Due to Covid-19 the family respectfully asks that anyone in attendance please wear a mask & practice social distancing.

Roubal Funeral Home of Wausaukee is assisting Vern’s family with the arrangements.