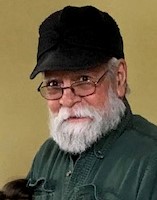 Closed his eyes peacefully to this world on Wednesday August 25th, 2021 at his home in Goodman. Tim was born on February 19th, 1954 in the Ovitz Hospital in Laona. Tim was welcomed by his mother Wilma Labine, father Ferdinand Labine and sister Donna to their lifelong home in Long Lake. Tim attended grade school in Long Lake until consolidation with Florence into a unified district, where he graduated in 1972. He worked construction jobs until buying his first garbage truck in 1975. Great Northern GP offered the first solid waste collection service in rural Forest County. His business later grew to include campgrounds operated by the Nicolet National Forest.

Tim married Pamela Gazler on May 23, 1977 and welcomed a stepson Jesse and later a daughter Rebecca to their home in Newald. After selling Great Northern GP to GAD of Iron Mountain, Tim moved his family to Goodman in 1991. He became interested in mining exploration and worked for BHP as a geo tech. When drilling and exploration ceased in Northern Wisconsin, he turned to trucking and heavy equipment work. Also when needed he was his parents caregiver for many years.

Tim is survived by his wife “best friend”, Pamela; daughter, Rebecca (Chad) Copiskey and their children Ruby and Harper and step-daughter Mallorie of Balsam Lake, Wis; step-son, Jesse (Megan) Nichols, his son Briar, and their children Myla and Harley of Armstrong Creek; sister, Donna Stanz of Red Granite; brother-in-law, Stanley (Elizabeth) Gazler; and niece and nephews: Wendy (Dean) Mathison of Red Granite, Walter Stanz and children of Kenosha, and Wayne (Julianne) Stanz and children of Sturgeon Bay. He was preceded in death by his parents; brother, Sonny; and a nephew, Michael.

In everyday life Tim was a kind and gentle man. He enjoyed making sushi and cooking for his wife, slipping the grandkids cookies, taking Ruby fishing and hunting for mushrooms. He was a maker of beautiful music on the guitar, stained glass windows and all things food. He made electrical things work and computers function. He fixed most of his own problems unless it involved paperwork.

Funeral Service will be held at 12pm (Noon) on Thursday September 2, 2021 at St. Norbert Catholic Church, Hwy 139, Long Lake with Father John Cerkas officiating. Visitation is from 10am until the time of Tim’s Service at church. A lunch will be served immediately after at the Long Lake Town Hall.

I am so sorry for your loss. I had only meet Tim a few times but he was outgoing and very nice. Prayers for you and the family.
RIP Uncle Tim. You are missed.
Tim was such a unique guy. Always enjoyed conversations on a wide variety of topics. I seem to remember one involved the best chili recipe. He will be missed by family and friends and our sympathies to Pam and family. God Bless & comfort you in the coming days.
Dad…if you were here you would be able to tell me that everything is going to be fine. There wasn’t anything we didn’t share in conversation except this. You were the dad every girl dreams about. You showed me how to provide kindness and compassion for even the worst situations. I find myself wanting to call you on my drive to work and home but now know why your not answering. I love you with all my heart and I promise to remember you and carry out your qualities in my children and tell them all about our memories. I promise to fill your void as a fishing partner for Ruby because I think I know all your best spots. Until we meet again dad, I’ll be doing the best I can without you. Your little girl always . Becky
Pam, So sorry for your loss Pam. Thoughts, prayers and Hugs from me here in Utah.
You will be missed by many! You were always a gentle and kind person! Fly high with the angels Tim!!
Was so sorry to hear this. RIP my friend
So sorry to hear about Tim, prayers for your family