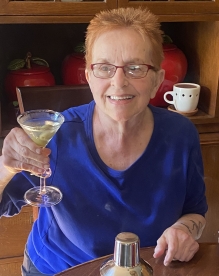 age 78, Wausaukee, died Wednesday at her daughter’s home in Marinette. She was born in Alpena, Michigan on June 3, 1943; daughter of Philip and Gertrude (Woloszyk) Goldbach. She was united in marriage to James Harmon on July 1, 1962 in Fort Wayne, Indiana. Ruth Ann moved from Butler, IN to Wausaukee in 1994. She worked at Kmart for approximately 10 years as well as other local businesses. She enjoyed crafting, and was a Flamingo fanatic but most importantly spending time with her family was what she thoroughly enjoyed.

No formal services will be held.

Roubal Funeral Home of Wausaukee is assisting her family with arrangements.

Gonna miss you sis. Loved our chats-always talking about cooking and music and that "cool" era you grew up in. Hugs from us to daddy, mom, Jim and Jason.
Sorry for your loss
Aunt Ruth Ann was an amazing woman. Loving, selfless and always had a smile on her face. I will miss our long calls talking about everything from recipes to polish language to her childhood to computer support. She has always had a special place in my heart and I will miss her dearly. Rest easy auntie. I’ll take care of your sister now. Love you!
I loved Ruth Ann she was a special friend for 30 years we worked at K-mart together and continued being close. Rest in peace my friend, I will keep you and your family in my prayers. God Bless you Love LouAnn
I'll miss you Ruth Ann. You were always a joy to talk to. Tell Jim and Jason that I said hi .
Rest in peace Auntie. We love you and will miss you. Love you guys.
Sorry for your loss. Ruth Ann was a wonderful person. I had the great pleasure of working with her. She will be missed
So sorry to hear of Ruth Ann’s passing. I enjoyed her for what was the brief time I was able to spend with her.
Sorry for your loss She was a great neighbor to have. We will miss her when we go to the cabin.
Heartbreaking ❤️ Many fond memories, so glad to be a part of family for over 30 years. Love you mother!!!
So very sorry for your loss. Ruthann was a true joy to be near and will be greatly missed.