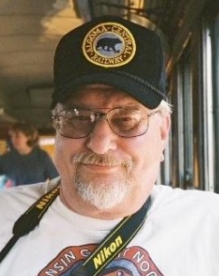 age 72, of Wausaukee, died Thursday December 5, 2019, at Oscar G. Johnson VA Medical Center. He was born in Milwaukee on August 20, 1947; son of the late Ulrich and Marie (Neuman) Storrm. Ron was united in marriage to Janice Babcock on November 15, 1969. She died May 13, 2017. Ron served his Country honorably in the Army from 1966 to 1969. He and Janice enjoyed riding motorcycles, photography, amateur radio and the history of trains.

Ron is survived by three children: Joseph (Kelly) Storrm, Jon (Suzie) Storrm, and Michelle (Daniel) Moore; and three grandchildren. He was preceded in death by his wife, Janice; and two brothers: Leo and Eddie.

Family and friends may call at Roubal Funeral Home on Thursday January 9, 2019, from 10am until the time of his Memorial Service at 11am. Pastor Don Landwehr will officiate. Full military honors will be provided by the Athelstane/Silver Cliff American Legion Post #66.