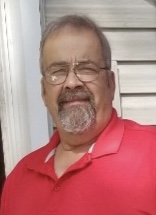 age 67, of Crivitz, passed away unexpectedly Tuesday April 12, 2022. He was born in Dansville, New York on January 5, 1955; son of Rodney and Freda (Buck) Forbes. After graduation from High School, at age 19 he joined the United States Army for 14 years and was honorably discharged. The following next 26 years he drove truck and also was a truck driving instructor before retiring. Mike was united in marriage to Elisa Mazon on June 18, 2016. He enjoyed spending time with his family, watching his favorite TV shows, had a fascination with airplanes, and also belonged to a bowling league at the Wausaukee Bowl. He will be dearly missed.

Mike is survived by his wife, Elisa; children: Jared (Mary King) Forbes of Frederick, CO, Phoenix Forbes of Chicago, Marissa (Ebon) Elder of Southfield, MI, and Montana Olsen of Crivitz; grandchildren: Sydney and Evan; mother, Freda; and four siblings: Randy, Kelly, Tracy, and Todd. He was preceded in death by his father, Rodney; and maternal and paternal grandparents.

Family will receive friends on Tuesday April 19, 2022 at Roubal Funeral Home after 9:00am until time of Military Rites at 11:00am conducted by the Crivitz American Legion Post #413 and VFW Post #2063. Burial will be held at a later date.

Our thoughts and prayers are with you. May you all find peace and comfort in God's speed. Mike was always kind to us and bubbly in nature - as we knew him.
So very sorry to read about Rodney's death. Prayers to your family.
Fly high with the angels my dear friend❤️❤️ My sincere condolences to your family, sending prayers to all.
May he RIP. My prayers are with the family. White family - Birmingham Al
R.I.P Rodney. You will be sadly missed by all your family and friends. I hope you are having a wonderful reunion with all your family and friends left the world before you. Please give me kisses to Skeeter Jo and Bella Jo for me. They were special dogs to us and still missed by me. Keep on trucking in the sky. Sincerely Becky
Our deepest condolences to all of "Mike's" family, we are so sorry for your loss... many memories made in our younger years...
Grandpa Forbes we will miss you so much! Evan really loved getting to know you. You were always so thoughtful sending Evan toys and cards for holidays. We will miss you and cherish you always
I will miss you so very much. I will always remember the fun times we had growing up. Love you
We are so sorry to hear of your loss. Sending prayers