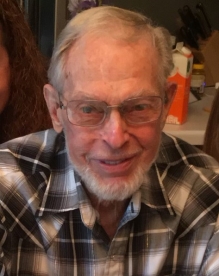 age 88, of Wausaukee, died peacefully at home on Friday September 10, 2021. He was born in Milwaukee on June 20, 1933; son of the late Paul {born in Switzerland} and Lois (Raash){born in Arizona} Hurzeler. Bob graduated from Pulaski High School, Milwaukee in 1951. At the age of 19 he was baptized a Catholic. From this time on, his faith was an integral part of his life. Bob joined the United States Navy in 1952 and was honorably discharged in 1957. Bob met the love of his life at St. Mary’s Hospital in Milwaukee, where Lynn was a nursing student and Bob was her patient. He married Lynn Spielvogel on January 16, 1960 and from this union they were blessed with five wonderful children. In 1995 Bob and Lynn moved to Wausaukee. He enjoyed woodworking, camping, gardening, hunting and planting trees. Bob had a love for music throughout his life. At a young age he played in the Grade School Band. Later in life, he and Lynn sang in the choir at St. Agnes Catholic Church and St. Margaret Catholic Church where they are members. He was an active member in the 3rd and 4th degree of the Knights of Columbus both locally and in Milwaukee. Bob was also involved in liturgy and choir at St. Agnes Catholic Church and was a member of the Lion’s Club.

We will be celebrating Bob’s life on Thursday, September 16th at St Agnes Catholic Church in Amberg. Visitation is from 10-12, followed by a Mass of Christian Burial at 12pm with Fr. David Schmidt officiating.  Bob will be laid to rest in the Amberg Cemetery with full military honors.

The Hurzeler family would like to thank all who were there for Bob and Lynn through this difficult time. Without the help of numerous caring St Agnes parishioners, a special neighbor, Darlene, the staff from Unity Hospice, especially Kimberly (CNA), and the many who showed their support through cards, meals and prayers, without whom this journey would have been unbearable.

Dear Lynn and the Family of Bob, Our Deepest Sympathy and Prayers, May God Hold you all Close in the Days Ahead!
Our sympathies to you, Lynn and your family. We saw this message as we were eating supper today. Sorry we couldn’t have been there. You were blessed with many years together and many memories. We’re happy for Bob to be out of his misery. Jesus blood and mercy made him sinless for entry to heaven.. Rejoice in that. We’ll still keep you in our prayers. Love Bob and Elaine.
Lynn I am so sorry for your loss Know that Bob is with the lord and free of pain now He is always going to be near and watching over you . Love you cuz Bob
I was so sorry to hear of the loss to the Hurzeler family and friends. My prayers are with you at this difficult time.
I'll be there for his Mass. My heart goes out to Bob's very large wonderful family. Bob and Lynn always made us feel welcome into the community of St. Agnes Church.
Bob you have earned your angel wings. You were a great husband, father and friend. I know you leave great memories for all of us. We may have been miles apart, but you and Lynn were thought about often.
So sorry for your lose Lynn and family.