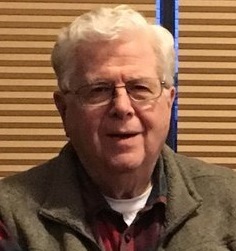 age 83, of Dunbar, passed away Wednesday February 6, 2019, at home.  He was born in Oneida, New York on December 23, 1935; son of the late Harry and Ruth (King) McGeoch.  On December 20, 1958, Nelson was united in marriage to the former Joy Kepner in Barker, New York, and they recently celebrated their 60th anniversary.

Nelson grew up on a farm near Cambridge, New York, and recounted stories of his upbringing to family and friends with pleasure. Music was often played in his childhood home, which explains his proficiency in piano and trumpet. Nelson was a Professor at Bob Jones University in Greenville, SC for over 40 years. He taught Bible and practical Christian living courses,      and served for many years as the Dean of the School of Applied Studies. One of his favorite courses and areas of expertise was John Bunyan’s Pilgrim’s Progress. While at Bob Jones, Nelson and his wife Joy took hundreds of students on summer cross-cultural trips to the Maritime Provinces of eastern Canada to help plant churches and reach people with the Gospel.

Nelson was a lifelong learner with a wide variety of interests including chess, cars, sports, and even poetry. He had a large collection of books on many topics such as Israel, the Tabernacle, geography, and higher education.  Nelson was an avid reader right up until the end of his life, and his greatest joy was studying God’s Word and sharing what he learned with others.  He was a gifted communicator with a practical wisdom which benefitted many of his family and friends. His practice was to always point them to the Lord, and to encourage them to discover for themselves a personal, vital, moment-by-moment relationship with God through His Son, Jesus Christ.

Nelson was a wonderful, loving husband, father, and grandfather and will be missed.

Family and friends will celebrate his life on Saturday February 16, 2019, at the Dunbar Community Bible Church at 11am, Pastor Bryan Raught will officiate.