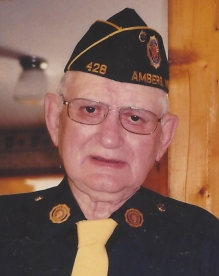 age 92, of Amberg, passed on Saturday July 24, 2021 at ManorCare Nursing of Kingsford. He was born on December 7, 1928, the 2nd of eight children to the late James Ervin and Violetta Agnes (Cowie) Smiley of Goodman. The Smiley family moved to Amberg in 1930 and Mel told many stories of his childhood and youth with Grandparents Smiley who resided with them and Grandparents Cowie of Niagara, giving many good memories. Also memories of Native Americans traveling on horseback stopped by the Smiley farm and his parents sharing their food. Erv cautioned them with “No Smoking” when the Smiley’s also gave them shelter for a night of rest in the barn. Mel with his Mom and Brothers worked hard on the family farm in his youth when their Father was hospitalized with health problems. Mel joined the U.S. Army on February 13, 1951 serving his Country in Germany during the Korean Conflict. Upon his discharge on January 26, 1953 he returned home to his family in Amberg, and became self-employed in the Logging Industry as he enjoyed being in the woods all his life.

He met and then married Grace Elaine Larsen on November 13, 1954 at the Lutheran Church in McAllister. Together they built a new home west of Amberg and raised their family of six children. The door was always open and the coffee pot on at their home. Grace passed away on July 20, 1982, at the age of 46.

Mel joined the Mullany-McTrusty American Legion Post #428 of Amberg in the winter of 1954 and has remained in continuous membership for 67 years. He served as Post Commander and First Vice Commander and in April of 2005, he was honored to be selected as “Legionnaire of the Year” in 2004. In his nomination letter to the Marinette American Legion County Council, Amberg Commander James Fronsoe told of Melvin’s devotion to his Post, attending all meetings, helping to organize and work all fundraisers; work at Bingo Parties at the VA Hospital in Iron Mountain; and hunters safety classes etc. He marched and carried the colors each year for the Memorial Day Parade as well with our American flag well into his 80’s. Commander Fronsoe stated “that if only one third of the fifty enrolled members were half as active as Melvin, it would be the most successful post in Marinette County. He remained active until he entered ill health. He belonged to other local organizations but his heart was with his Legion Post and being a faithful strong American citizen. It is to be noted that he also remained working until the age of 85 when he was diagnosed with MDS, a type of Leukemia.

He enjoyed his long life with his beloved family, logging, deer and duck hunting, was known to bring down a bear or two, annual fishing trips to Canada with his kids and also friends visiting (lots of that) and traveling.

He married Rosella Irene (Bialkowski) Mattison on Saturday April 29, 1989 in The United Presbyterian Church of Amberg inheriting her four adult children and adding to the family circle. They have since resided on Rosie Lane, enjoying their home, gardening, hosting the annual Smiley Easter Egg Hunts, Christmas parties and just being with both his and her families. He showed and gave his deep love to his family.

He and Rosie traveled at Spring Break up time and in the autumn to all the states together except Hawaii and even spent a month in Europe. The highlight of all travels was to visit family and friends, keeping in close contact.

All in all Melvin Smiley lived a full loving meaningful life with his family, extended family and friends as was witnessed when he was honored for his 90th birthday party held at the Amberg Community Center hosted by granddaughters Ashlei, Samantha, and Vanessa. When his wife observed the guests coming to the Celebration, filling the hall with almost 200 people, she said to him “Do you see how you are loved, respected, and now being honored?”

The family and friends of Melvin have lost a loving, kind and very caring person with his passing and it leaves a great emptiness in our lives, but we thank you Dear Lord for his life.

All services will be take place at the United Presbyterian Church of Amberg on Friday July 30, 2021 from 10am until the time of Melvin’s funeral at 1pm. Pastor Don Landwehr is officiating. Burial will in the Amberg Cemetery and his pallbearers are grandsons Christopher, Zachery, James Smiley, Shawn and Brad Barker, Tejay Smiley, and Daniel Smiley. Full military honors will be provided by the Mullany-McTrusty American Legion Post #428 of Amberg at the cemetery.

The family thanks Dr. Gautum and Dr. Mihailescu of Aurora BayCare Green Bay for their wonderful and special care; and they acknowledge the excellent care given to Melvin by the staff at ManorCare Health Care in Kingsford.

Such a larger than life guy. Always had a story and a smile ❤️
All my love ❤️ The memories are beautiful and endless. Looking forward to visiting soon.
My deepest condolences to the family. I have great memories as a kid visiting the Smiley’s home. Rest In Peace!! Incredible man and family!!
We are so sorry for your loss, prayers for all of you. If you need anything let us know.
Sending sympathies to all of Melvens family. Rest in peace.