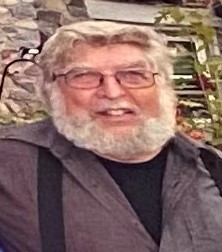 age 80, of Wagner, passed away Monday December 20, 2021, at Aurora Bay Area Medical Center. He was born in Marinette on November 13, 1941; son of the late Roy and Margaret (Philipps) Meyers. Larry graduated from Wausaukee High School in 1960 and immediately started out his 60 yearlong truck driving career. He worked for several companies before starting his own logging and truck driving company in the mid 60’s. Larry was united in marriage to his wife Judith on August 10, 1963 in Marinette. He enjoyed hunting, 4 wheeling, and having his dogs by his side Ginger and Brandy. Larry always had a story to tell (even though you most likely heard it before) and was a joke teller. He drove truck right up until his 80th birthday. “Keep on Truckin.”

Loren is survived by his loving wife Judith; sons: Russell (Beth) Meyers and Doug (Jenny) Meyers; he will always be known as “Grandpa Honk Honk” by his two grandsons: Zack (Kelsey) and Dillon (Vanessa); sister, Janet Havel; sister-in-laws: Pat (Glenn) and Jessie (Bob); and numerous nieces and nephews. He was preceded in death by his daughter, Diana; sister, Elaine Anderson; brothers: Bob, Glenn, and Elwood “Buck”; and brother-in-laws: Eddie and Bud.

Visitation for Loren will be from 2pm until the time of his funeral at 6pm on Tuesday December 28, 2021, at Roubal Funeral Home. Pastor Fred Barribeau is officiating. Burial will be in the St. Edward Cemetery this spring.

Larry’s family would like to send a sincere thank you to all Aurora and Unity Hospice staff as well as all of his business acquaintances who over the years became family and friends.

Larry, I will miss you old friend. Keep the tank full, when I join you, we'll go grab some logs.
My memories of Larry stretch all the way back to visits with my family (Ralph and Marge Crego) when I was a lot younger. Truly special times with terrific relatives, I'm sure Larry would approve if, in lieu of flowers, I make a donation to the American Cancer Society. Farewell cousin; show the angels what haulin' logs is all about!!