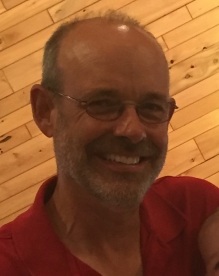 age 59, of Amberg, died unexpectedly on Friday August 14, 2020, in Amberg. He was born in Marinette on April 16, 1961; son of David and Joan (Fick) McTrusty. If you could find him (and before cell phones and smart phones), that may have been difficult, but if you did…he was always busy farming, logging, cutting firewood, and maybe a little hunting. But he was never too busy to give any family member or friend a helping hand. His response to calls for assistance was, “Give me a few minutes and I’ll be there.” He was talented in so many areas, from fixing cars, appliances, snowmobiles, tractors and farm machinery, to felling a tree just where he…or you wanted it. If all the parts were there, he could make it work. He handled equipment from dump trucks to chain saws like they were a part of his natural body. From a little boy to being a grandpa, he was kind of the family sweetheart. One family member remarked once that he wore his cap too far down so that he could have ears like Joe’s. Another referred to him as his idol. His family meant everything to him.

A maxim for all of us to go through life with is to live respected and loved and at the end to die regretted. He nailed it! It is highly unlikely that those who knew him would have anything but kind words to say about him. His final project was to get his new home just the way he wanted, but sadly, he didn’t quite finish. The heart that failed him at the end of his life is not the heart that endeared him to all who knew him.

Too soon, too suddenly, he leaves a large void in so many lives. He is survived by his daughter Ashlei (Anthony) Guarisco and grandson Joey; mother Joan McTrusty; fiance Carrie Groy and children Shyann(Roman) and Austin; best friend and brother Jim(Mary) McTrusty; sister Patty(Tim)Leatherman; nephews and niece Little Jim(Francesca) McTrusty, Joey(Ana)McTrusty, Andrew(Rachel) Leatherman; Sarah(James)Johnson. He is further survived by many aunts, uncles, family members and friends. Joe was preceded in death by his father, David McTrusty and his grandparents.

Memorial Visitation is scheduled for Friday August 21st from 12pm until 2pm at Roubal Funeral Home in Wausaukee. Burial will be in the Amberg Cemetery.