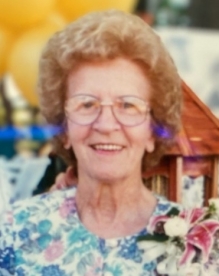 age 93, of Amberg, died peacefully Saturday January 23, 2021. She was born on January 2, 1928 in Kansas City, KA to Otto and Bessie (Curtis) Wolff. She was a child when they moved to Amberg and graduated from Amberg High School in 1946. After marrying Julius “Bill” Wontor on August 17, 1946, they moved to Chicago for careers and later to Milwaukee until retiring in 1983 and moved back to Amberg. Emma was a devoted wife, dedicated mother and lived her entire life with strong Christian values.

She and Bill enjoyed vacationing in the Florida Keys, Alaska and numerous family fishing trips to Canada. She always enjoyed spending time with and spoiling the grandchildren. She crocheted over 70 afghans for family members and loved her Milwaukee Brewers. Emma may be remembered by some as a prankster and a “cut-up” but nearly all will remember her carrot cake and mayonnaise potato salad.

A private family graveside service will be held in the Amberg Cemetery.