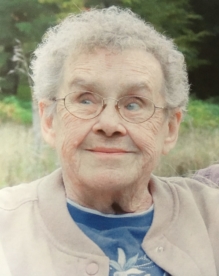 age 88, of Amberg, passed away peacefully at home on Friday March 27, 2020. She was born in Wauwatosa on May 25, 1931; daughter of the late Charles and Eleanore (Mahkorn) Kehl. She graduated from St. John Cathedral High School and the University of Wisconsin. Eleanore was united in marriage to James Forney on October 24, 1953, at St. Bernard Catholic Church in Wauwatosa. She served as Amberg Town Clerk and Town Board Supervisor and also hosted Amberg Christmas Dinners for 13 years. She was a friend of the Mid-County Library, member of Amberg Community Association, served on the Board of Directors for Wausaukee Enterprises and a member of St. Agnes Catholic Church and CCW. Eleanore was an avid reader, enjoyed sewing and knitting, as well as gardening. She also loved playing cribbage.

Eleanore is survived by her son, Michael (Marcia) Forney; son-in-law, Darryl Newingham; six grandchildren; and 12 great grandchildren. She was preceded in death by her husband, Jim; her son, Keith; her daughter, Laura; and sister, Cathi.

Burial will be in the Amberg Cemetery.