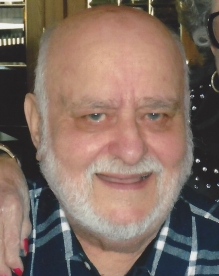 Tony was born December 19th, 1929 in Manistique Michigan and passed away quietly in his home in Beecher, Wi at 3:45 am on December 4th at 90 years old. He was the son of Anthony J and Anna Pazitny. Tony was married to Pearl Tobin for 21 years when she passed on. Tony married Beverly Pollack (Zeromski) from Brown Deer, Wi in August 1975 and were married for 45 years. Tony was Beverly’s’ sweetheart.

Tony attended Dunbar elementary, Pembine High school and Cudahy High school. Following school, he joined the Marines at 17 and was awarded several expert marksmanship trophies and shot the highest score ever recorded at the time in the Marines. Tony also married Pearl while he was in the Marines. Tony worked at Allen Bradley in Milwaukee and after many unsuccessful attempts, was hired on at the Milwaukee Police Department.

Tony became a Milwaukee Police officer in 1953 and served for 29 years as a Patrolman, Detective and on the Vice Squad. He also was a member of the Police Department Trap shooting team. Tony was known as a tough cop but a gentle giant. Tony retired from the Police department and moved to Pembine Wi in 1982 and finished building his log home and continued his love for hunting and fishing and woodcraft.

Tony was an avid hunter, fisherman and a golfer. His home is decorated with many animal and fish mounts and has a hunting cabin next to his house that many hunters have stayed in over the years. Tony was an expert carpenter and builder and had his own business AJ Construction. He loved working on and building projects for everyone he met. Tony also built his log home from the ground up and designed his home to accommodate all of his hunting and fishing trophies, including a moose he shot in Canada with an exceptionally long shot. Tony also had a woodworking shop and designed, built and sold countless different types of wooden home decorations and knick knacks. Tony also has a hole in one on Green Acres golf course. If it was made out of wood, Tony could make it. Tony was also known as phenomenal cook and baker and frequently prepared cookies, breads, and cheesecake to give out to his friends, family and the Pembine Senior Citizens club.  Tony was also a member of Pembine Senior Citizens, Men’s Breakfast club, Dunbar Sportsman’s club trap team, St. Margarets Catholic Church, and the Milwaukee Retired Policeman’s Association.

Celebration of Tony’s Life will be Saturday June 19, 2021 at St. Margaret Catholic Church in Pembine. Visitation is from 10am until the time of Mass at 11am. He will be buried in the Pembine Cemetery immediately following mass.

Tony has always said “Rickees’ time and efforts contributed immensely to our health and welfare and we will always and forever be indebted to her”.